Each year, thousands of people from across the world apply for a visa to the USA. Some apply for a tourist visa, some for student visas and some for work visas. Not all these visas make a person eligible for permanent residency. Thus, if you want to migrate to America, it is important to file for the right Immigrant Visa. Read on to find out more about these visas.

In 2015, 13.4% of the American population was foreign-born.  This did not include the number of children born to immigrants. America’s neighboring country, Mexico sends the highest number of immigrants to the USA but they are not the only source of immigrants. India and China also come into the top three migrant-origin countries.

Migration to the USA may be a hot conversation topic today but hearing about someone wanting to migrate to America isn’t something new. In as far as 1850, a little less than 10% of the American population was foreign-born. 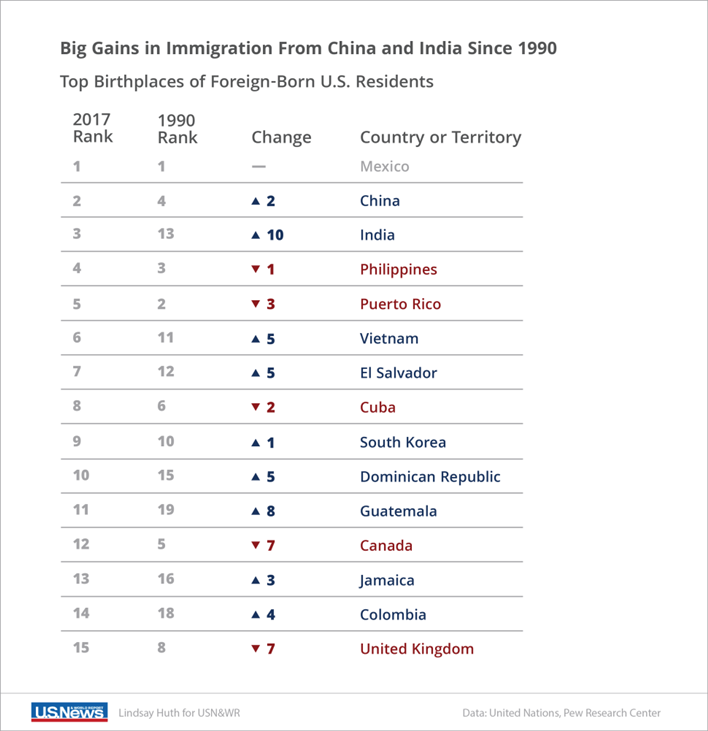 Why Migrate to America?

Most people migrate to America in search of a better job and higher standards of living. The American Dream fuels many people’s desire to leave their home country and move here. They believe that by working hard in America, they can give their future generations a better life.

The strength of the dollar vs other currencies also fuels migration. Many people work here and send money home to their families in their native countries. Other reasons for immigration include good educational systems and family reunions.

Migrant Population in the US in 2016


How to Migrate to America – 5 Immigrant Visa Categories


Migrating to America is not easy. The first step to becoming a permanent resident is to get an immigrant visa. For this, the applicant must be sponsored by a US citizen or permanent resident who he/she is related to or a US employer. There are a few exceptions to this as well.

A US citizen can sponsor his/ her fiancé’s application to migrate to America.  For this, he/she may apply for a K1 visa. This allows the person to move to America and live here legally for 90 days within which the couple must get married.

If the person has been married before, he/she will need to prove that they were divorced or that the earlier spouse is deceased. Unmarried, dependent children of the applicant can also be sponsored for a visa. After marriage, the applicant may file for a change in visa status to become a permanent resident.

US companies may sponsor employment visas for skilled workers to migrate to America under the Employment-Based Immigration category. Each year, approximately 1,40,000 visas are awarded in this category. There are 5 preference categories within this category.

People with extraordinary abilities in arts, science, education, athletics or business, outstanding researchers and professors and multinational managers are given the first preference. The second preference is given to immigrants with advanced degrees.

The third preference is given to professionals, skilled workers and unskilled workers. Certain special types of immigrants fall into the fourth preference category. This includes broadcasters, religious ministers, certain former employees of the US government, translators and people enlisted outside the USA to serve in the US army. Immigrant entrepreneurs are given the fifth preference.

In most cases, the spouse and unmarried, minor children can also accompany the applicant on such an immigrant visa. Most categories are heavily oversubscribed and hence, applicants may often have to wait for many years to get a visa.

Once an immigrant gets a permanent resident status or green card, he or she can move in and out of the USA freely. However, if they stay outside the USA for more than one year at a stretch, a new immigrant visa will be needed to re-enter the USA. This is known as the SB1 visa.

America was envisioned as a country that had a diverse population. Some countries like India and China already have a very strong presence in the USA. However, there are other countries such as Kenya, Nepal, and Malaysia that are not very well represented in the USA. People from these countries who want to migrate to America can apply for a diversity visa.